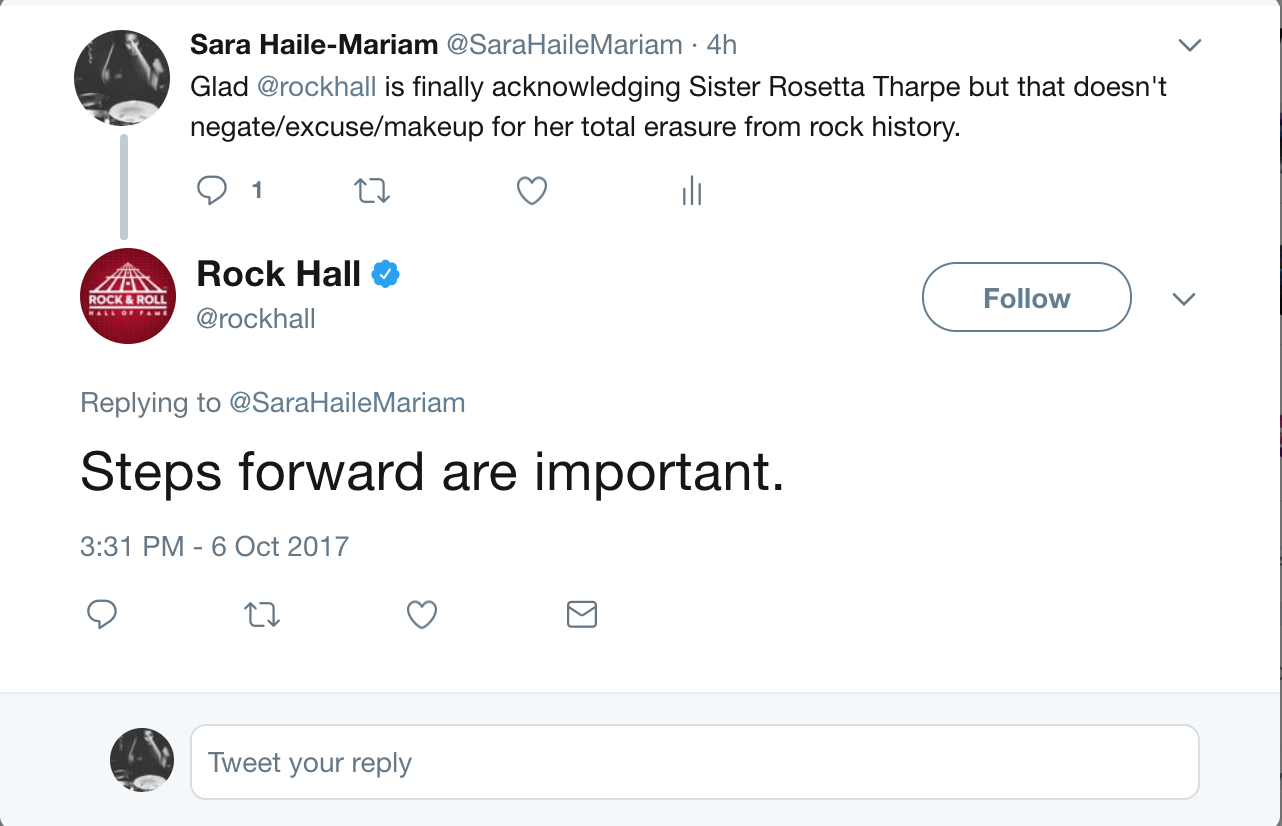 Rock and roll was FOUNDED by a black woman named Sister Rosetta Tharpe. Patriarchy and white supremacy robbed us of knowing what she accomplished, what she contributed to, and of being able to see ourselves in her.

They robbed us of being able to aspire to be like her.

They robbed us of accessing the art of black artists (specifically black women) who were influenced by her.

The fact that rock and roll is perceived as a “white genre” for “white men” is nonsensical. It is ahistorical. It is nonfactual.

As a black woman in rock and roll this is personal for me. I didn’t understand my instincts and my longing and my place until I found Rosetta. I am angry for lost time, and for the knowledge that there are others who have music in them that don’t allow themselves to explore playing instruments because our culture tells them that those instruments aren’t for them. Our culture tells us that these genres aren’t for us but history says otherwise.

Acknowledging that history without acknowledging all the ways it’s been rewritten is insufficient. It is a step forward on a false path. It is not enough. Failing to fully account for what happened ensures that history will repeat itself.

This past weekend we’d come to learn that Netflix premiered a documentary about the life of Marsha P. Johnson from director David France that features the uncredited and uncompensated work of Reina Gossett, a black trans woman who is borrowing money to pay rent while he gets paid off of her efforts.

I encourage you to share both Reina and Rosetta’s stories. I encourage you to let these institutions know that we are watching them and we will no longer be complicit in the harm that they cause. Tell them that telling our stories at the expense of our people is NOT okay. Tell them that accolades mean nothing if they must come at the expense of our dignity. At the cost of our truth.

A part of me wants to ask you to vote for Sister Rosetta Tharpe’s induction into the rock and roll hall of fame. To make it so that her induction, which should rise above the need for nomination, is OUR choice.

But another part wants to say fuck this mess and the house it was built in.

If they don’t prove a willingness to rectify what they’ve contributed to, then they deserve to be made relics.

A sad memory of an America that loved and profited off of black culture, at the expense of black people.

To email Netflix and demand that they acknowledge and compensate Reina Gosset for her unpaid labor click here. https://media.netflix.com/en/contact-us

If you want to vote for Sister Rosetta Tharpe’s induction into the Rock and Roll Hall of Fame click here: https://www.rockhall.com/class-2018-nominees…